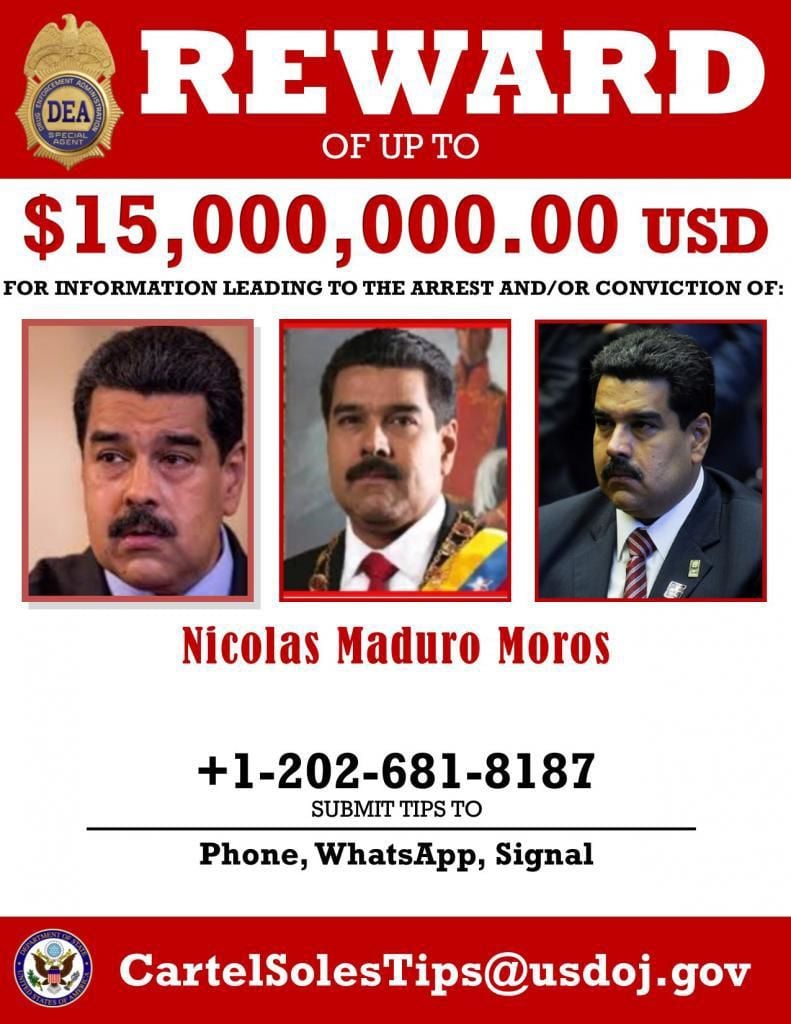 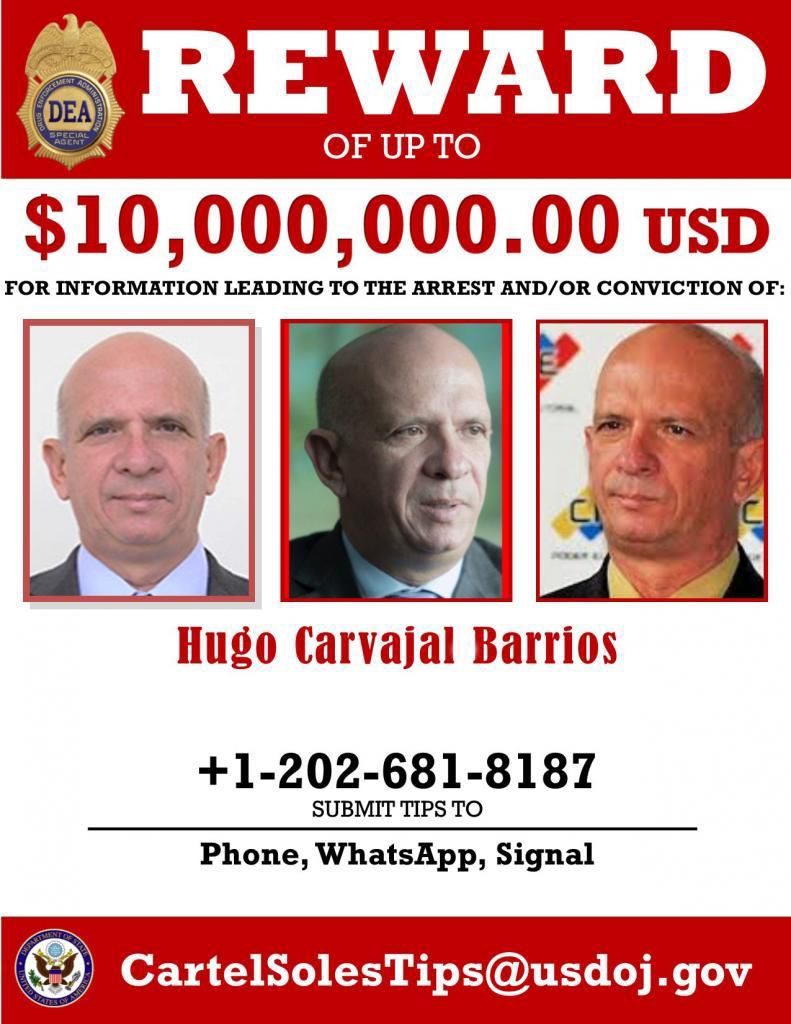 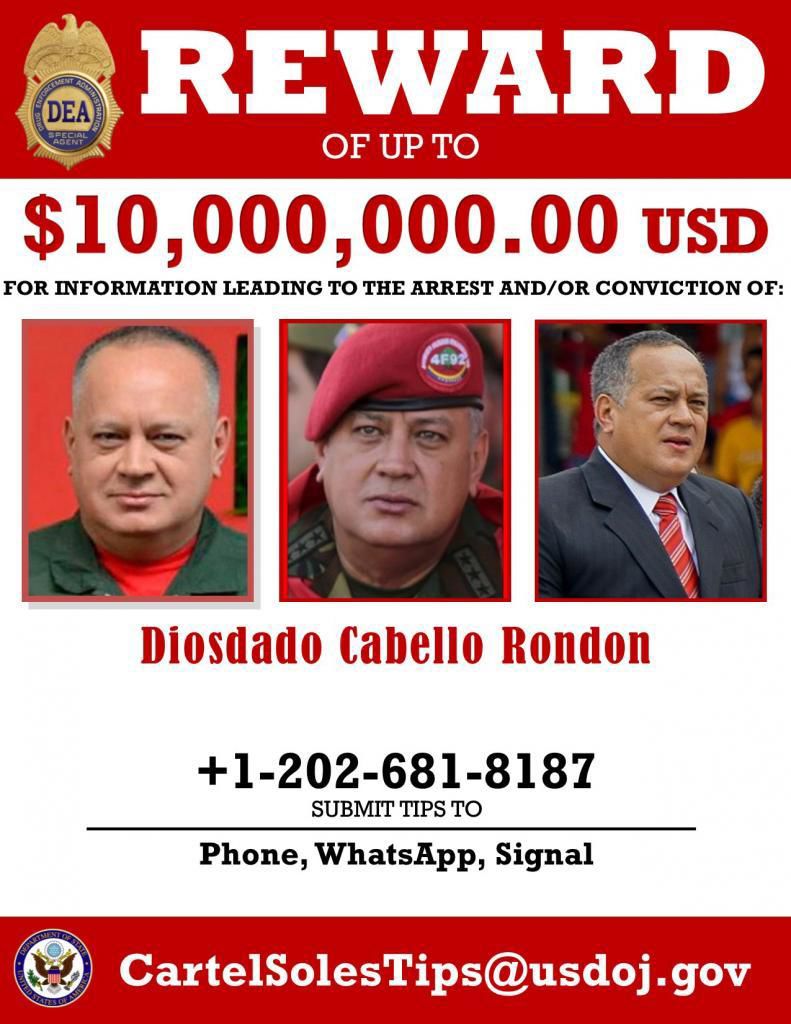 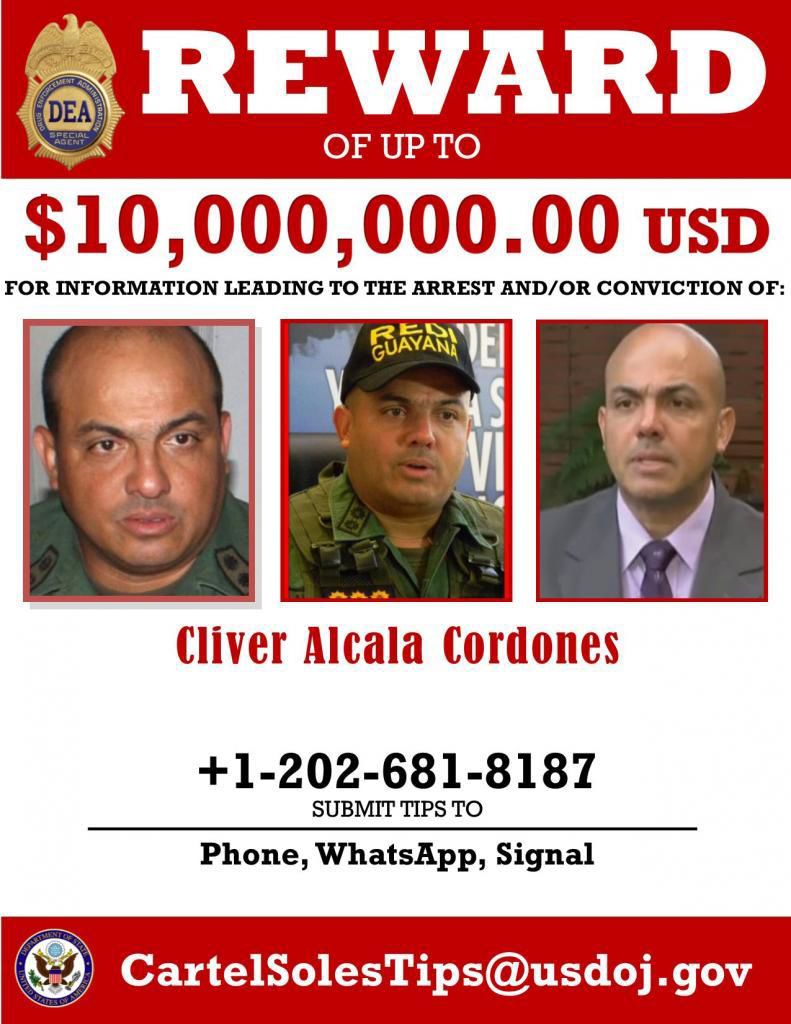 “The Venezuelan regime, once led by Nicolás Maduro Moros, remains plagued by criminality and corruption,” said Attorney General Barr. “For more than 20 years, Maduro and a number of high-ranking colleagues allegedly conspired with the FARC, causing tons of cocaine to enter and devastate American communities. Today’s announcement is focused on rooting out the extensive corruption within the Venezuelan government – a system constructed and controlled to enrich those at the highest levels of the government. The United States will not allow these corrupt Venezuelan officials to use the U.S. banking system to move their illicit proceeds from South America nor further their criminal schemes.”

“Today we announce criminal charges against Nicolás Maduro Moros for running, together with his top lieutenants, a narco-terrorism partnership with the FARC for the past 20 years,” said U.S. Attorney Berman. “The scope and magnitude of the drug trafficking alleged was made possible only because Maduro and others corrupted the institutions of Venezuela and provided political and military protection for the rampant narco-terrorism crimes described in our charges. As alleged, Maduro and the other defendants expressly intended to flood the United States with cocaine in order to undermine the health and wellbeing of our nation. Maduro very deliberately deployed cocaine as a weapon. While Maduro and other cartel members held lofty titles in Venezuela’s political and military leadership, the conduct described in the indictment wasn’t statecraft or service to the Venezuelan people. As alleged, the defendants betrayed the Venezuelan people and corrupted Venezuelan institutions to line their pockets with drug money.”

“Over the last decade, corrupt Venezuelan government officials have systematically looted Venezuela of billions of dollars,” said U.S. Attorney Fajardo Orshan. “Far too often, these corrupt officials and their co-conspirators have used South Florida banks and real estate to conceal and perpetuate their illegal activity. As the recent charges show, Venezuelan corruption and money laundering in South Florida extends to even the highest levels of Venezuela’s judicial system. In the last couple of years, the U.S. Attorney’s Office in South Florida and its federal law enforcement partners have united to bring dozens of criminal charges against high-level regime officials and co-conspirators resulting in seizures of approximately $450 million dollars.”

“These indictments expose the devastating systemic corruption at the highest levels of Nicolas Maduro’s regime,” said Acting Administrator Dhillon. “These officials repeatedly and knowingly betrayed the people of Venezuela, conspiring, for personal gain, with drug traffickers and designated foreign terrorist organizations like the FARC. Today’s actions send a clear message to corrupt officials everywhere that no one is above the law or beyond the reach of U.S. law enforcement. The Department of Justice and the Drug Enforcement Administration will continue to protect the American people from ruthless drug traffickers – no matter who they are or where they live.”

“The collaborative nature of this investigation is representative of the ongoing work HSI and international law enforcement agencies perform each day, often behind the scenes and unknown to the public, to make our communities safer and free from corruption,” said Acting Executive Associate Director Erichs. “Today’s announcement highlights HSI’s global reach and commitment to aggressively identify, target, and investigate individuals who violate U.S. laws, exploit financial systems, and hide behind cryptocurrency to further their illicit criminal activity. Let this indictment be a reminder that no one is above the law – not even powerful political officials.”

According to the allegations contained in the superseding indictment, other court filings, and statements made during court proceedings:

Since at least 1999, Maduro Moros, Cabello Rondón, Carvajal Barrios and Alcalá Cordones, acted as leaders and managers of the Cártel de Los Soles, or “Cartel of the Suns.” The Cartel’s name refers to the sun insignias affixed to the uniforms of high-ranking Venezuelan military officials. Maduro Moros and the other charged Cartel members abused the Venezuelan people and corrupted the legitimate institutions of Venezuela—including parts of the military, intelligence apparatus, legislature, and the judiciary—to facilitate the importation of tons of cocaine into the United States. The Cártel de Los Soles sought to not only enrich its members and enhance their power, but also to “flood” the United States with cocaine and inflict the drug’s harmful and addictive effects on users in the United States.

Marín Arango and Hernández Solarte are leaders of the FARC. Beginning in approximately 1999, while the FARC was purporting to negotiate toward peace with the Colombian government, FARC leaders agreed with leaders of the Cártel de Los Soles to relocate some of the FARC’s operations to Venezuela under the protection of the Cartel. Thereafter, the FARC and the Cártel de Los Soles dispatched processed cocaine from Venezuela to the United States via transshipment points in the Caribbean and Central America, such as Honduras. By approximately 2004, the U.S. Department of State estimated that 250 or more tons of cocaine were transiting Venezuela per year. The maritime shipments were shipped north from Venezuela’s coastline using go-fast vessels, fishing boats, and container ships. Air shipments were often dispatched from clandestine airstrips, typically made of dirt or grass, concentrated in the Apure State. According to the U.S. Department of State, approximately 75 unauthorized flights suspected of drug-trafficking activities entered Honduran airspace in 2010 alone, using what is known as the “air bridge” cocaine route between Venezuela and Honduras.

In his role as a leader of the Cártel de Los Soles, Maduro Moros negotiated multi-ton shipments of FARC-produced cocaine; directed that the Cártel de Los Soles provide military-grade weapons to the FARC; coordinated foreign affairs with Honduras and other countries to facilitate large-scale drug trafficking; and solicited assistance from FARC leadership in training an unsanctioned militia group that functioned, in essence, as an armed forces unit for the Cártel de Los Soles.

An indictment unsealed today in the District of Columbia charges Vladimir Padrino Lopez, 56, minister of defense of Venezuela. The indictment alleges that from March 2014 until May 2019, Padrino Lopez conspired with others to distribute cocaine on board an aircraft registered in the United States.

Padrino Lopez, who holds the rank of general in the Venezuelan armed forces, held the authority for interdicting aircraft, many of which are registered in the United States, suspected of being used to traffic drugs from Venezuela to countries in Central America. On numerous occasions, Padrino Lopez ordered or authorized the Venezuelan military to force suspected trafficking aircraft to land or to shoot down the aircraft. However, Padrino Lopez allowed for other aircraft whose drug trafficking coordinators paid bribes to him to safely transit Venezuelan airspace.

On Sept. 25, 2018, the U.S. Department of the Treasury’s Office of Foreign Assets Control included Padrino Lopez on its Specially Designated Nationals List. Pursuant to the Foreign Narcotics Kingpin Designation Act, this means that his assets are blocked and U.S. persons are generally prohibited from having financial transactions with him.

Maikel Jose Moreno Perez, 54, current chief justice of the Venezuelan Supreme Court, was charged via a criminal complaint in the Southern District of Florida with conspiracy to commit money laundering and money laundering in connection with the alleged corrupt receipt or intended receipt of tens of millions of dollars and bribes to illegally fix dozens of civil and criminal cases in Venezuela.

The complaint alleges, for example, that the defendant authorized a seizure and sale of a General Motors auto plant with an estimated value of $100 million in exchange for a personal percentage of the proceeds. Similarly, the complaint alleges that the defendant received bribes to authorize the dismissal of charges or release against Venezuelans, including one charged in a multibillion-dollar fraud scheme against the Venezuelan state-owned oil company.

According to the criminal complaint, in or around October 2014, Moreno Perez told U.S. authorities in a visa application that he earned the equivalent of about $12,000 per year from his work in Venezuela. From 2012 to 2016, the defendant’s U.S. bank records show approximately $3 million in inflows to the defendant’s accounts, primarily from large round-dollar transfers from shell corporations with foreign bank accounts linked to Co-Conspirator 1, who is a former criminal defense attorney in Venezuela that currently controls a media company in Venezuela.

As set out in the criminal complaint, the defendant’s bank records allegedly show that from 2012 to 2016, the defendant spent approximately $3 million, primarily in the geographical area of South Florida. For example, bank records allegedly show that Moreno Perez spent about $1 million for a private aircraft and private pilot, more than $600,000 in credit or debit card purchases at stores primarily in South Florida (including tens of thousands of dollars at luxury stores in Bal Harbor, such as Prada and Salvatore Ferragamo), about $50,000 in payments to a luxury watch repair store in Aventura, and approximately $40,000 in payments to a Venezuelan beauty pageant director.

HSI’s Miami Field Office conducted the investigation. Assistant U.S. Attorney Michael N. Berger of the Southern District of Florida is in charge of the prosecution.

The indictment alleges that from February 2017 until March 2019, El Aissami Maddah and Ramirez Camacho worked with U.S. persons and U.S.-based entities to provide private flight services for the benefit of Maduro’s 2018 presidential campaign, in violation of OFAC’s sanctions targeting Maduro after he organized elections for the illegitimate National Constituent Assembly that Cabello Rondon now leads.

The U.S. Department of State, through its Narcotics Rewards Program, is offering a reward of up to $10 million for information leading to the arrest and/or conviction of El Aissami Maddah.

HSI’s New York Field Office conducted the investigation. This case is being handled by the U.S. Attorney’s Office for the Southern District of New York’s Terrorism and International Narcotics Unit. Assistant U.S. Attorneys Sam Adelsberg and Amanda L. Houle are in charge of the prosecution.

Other individuals charged in separate indictments include:

An indictment is merely an allegation and all defendants are presumed innocent until proven guilty beyond a reasonable doubt in a court of law.

As thirty year-old Ornella Greaves is laid to rest, her grieving husband, Darren Joseph says he is offended that Commissioner of Police Gary Griffith hasn't made any efforts to meet him.

Contractors and workers want this Corporation CEO out

Serious allegations of misconduct are being levelled against the CEO of the Mayaro Rio Claro Regional Corporation.

Some grants are being denied in Tobago

The Division of Health, Wellness and Family Development is at this time still in the process of paying out COVID-19 relief grants, some two months after persons would have applied.

A lot of work is happening before the election

The Minister of Works and Transport Rohan Sinanan at the sod turning ceremony for the Morvant Junction to Maritime Upgrade Project...

As Canada and UK are identified for the next batch of repatriations to T&T, the Minister of Health denies playing a diabolical game with the lives of T&T citizens stranded abroad.

1991 - 2020 Caribbean Communications Network
Powered by BLOX Content Management System from TownNews.com.
You don't have any notifications.